Involves Winston-Salem, Forsyth County’s Northern Beltway. In 1997 the NCDOT (NC Department of Transportation) marked properties in the western loop by recording corridor restrictions in the Forsyth County Register of Deeds. In 2008 the NCDOT marked the eastern leg properties.

Lawsuit filed against the NCDOT by Kirby and others. On February 17, 2015, a unanimous decision was ordered by the N.C. Court of Appeals ruling the NCDOT’s actions on the Map Act were a ‘taking’ by inverse condemnation. This inverse condemnation was pursuant to NCGS 136-111.

On March 24, 2015 the NCDOT petitioned the N.C. Supreme Court for discretionary review. The Supreme Court does not have to accept their appeal and may choose to let the Court of Appeals decision to stand as the law.

On April 6, 2015, Hendrick Bryant Nerhood Sanders & Otis attorney, Matthew Bryant, filed a response to the NCDOT petition arguing the appeal to the Supreme Court should not be granted.

Land owners will now wait until we hear the Supreme Court’s plans whether to hear the case on appeal or not.

In the meantime, we are still filing inverse condemnation cases based on the Kirby ruling. Over 50 cases have been filed since the Court of Appeals decision and more are being filed.

Call the Condemnation Attorneys at Hendrick Bryant at 336-723-7200 if you are a property owner in NC that has been affected by the NCDOT Map Act corridor. 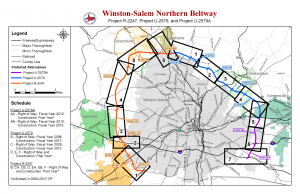