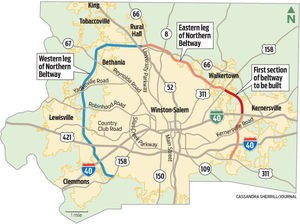 On February 17, 2015, the North Carolina Court of Appeals ruled that nine (9) Forsyth County land owners had their property taken by the NCDOT the day NCDOT filed a protected map on their property. NCDOT will have to now buy these owners’ property, pay interest, costs and fees.

The Forsyth County Northern Beltway owners have had their property marked by the NCDOT on the register of deeds since 1996.

The attorneys at Hendrick Bryant Nerhood Sanders & Otis, LLP started this fight in September 2010 on behalf of the property owners in the Northern Beltway, and have had tremendous support from owners and other attorneys throughout the state. No one should have to wait decades for justice and our Courts have served justice to all. We should be proud of our system.

Here is the an article in the Winston-Salem Journal
http://www.journalnow.com/…/article_c6120f2a-b6d8-11e4-ab57…(breaking news: N.C. Appeals Court says state must pay landowners in the path of the Northern Beltway)

If you are a property owner whose land has been affected by the Map Act, call Hendrick Bryant Nerhood Sanders & Otis, LLP (336-723-7200) if you are ready to pursue your claim.

Below are the conclusions from the Court of Appeals Opinion:

III. Conclusion
Accordingly, we hold the trial court erred when it concluded Plaintiffs’ claims for inverse condemnation were not yet ripe based on its determination that Plaintiffs did not suffer a taking at
the time NCDOT filed the transportation corridor maps for the Western and Eastern Loops. We remand this matter to the trial court to consider evidence concerning the extent of the damage
suffered by each Plaintiff as a result of the respective takings and concerning the amount of compensation due to each Plaintiff for such takings. In light of our disposition that the trial court
erred by dismissing Plaintiffs’ claims for inverse condemnation, we need not consider NCDOT’s issue on appeal concerning whether the trial court erred by failing to dismiss Plaintiffs’ claims for inverse condemnation with prejudice, rather than without prejudice.
Additionally, we note that the relief sought by Plaintiffs in their respective complaints was: for the recovery of damages suffered when NCDOT exercised its power of eminent domain against their properties by recording the transportation corridor maps pursuant to the Map Act; for NCDOT to be compelled to purchase Plaintiffs’ properties; and for recovery of fees, costs, taxes, and interest. Plaintiffs’ challenge to the constitutionality of the Hardship Program was one of five alternative claims alleged in order to obtain this relief. Because our disposition allows the trial court, upon consideration of evidence to be presented by Plaintiffs, to award Plaintiffs the relief they sought in their respective complaints, we decline to consider the arguments presented on appeal concerning the constitutionality of the Hardship Program as applied to Plaintiffs. Therefore, we decline to further address the arguments presented for this issue on
appeal. We also decline to address NCDOT’s suggestion that Plaintiffs’ claims for inverse condemnation are barred by the statute of limitations because, as NCDOT concedes, construction on the Northern Beltway Project has not been completed. See N.C. Gen. Stat. § 136-111 (“Any person whose land or compensable interest therein has been taken by an intentional or unintentional act or omission of the [NCDOT] and no complaint and declaration of taking has been filed by [NCDOT] may, within 24 months of the date of the taking of the affected property or interest therein or the completion of the project involving the taking, whichever shall occur later, file a complaint[.]” (emphases added)). We further decline to address any remaining assertions for which Plaintiffs and NCDOT — as appellants and cross-appellants, respectively — have failed to present argument supported by persuasive or binding legal authority.

Why should a property owner file an Inverse Condemnation Claim?

If you are a Property Owner whose property has been affected by the NCDOT Map Act corridors, then you have an Inverse Condemnation.

Condemnation is the taking of property owner’s land for public purpose. The taker has to pay just compensation for the property taken.

Inverse Condemnation is a term used in the law to describe a situation in which the government takes private property but fails to pay the compensation required by the 5th Amendment of Constitution. In some states the term also includes damaging of property as well as taking it.

The Map Act Corridors have been ruled an inverse taking by the N.C. Dept. of Transportation in the Kirby case one by attorney Matthew Bryant at Hendrick Bryant Nerhood Sanders & Otis LLP on behalf of property owners in the following North Carolina areas: Forsyth County, Wake County, Cleveland County, Cumberland County, Guilford County, and Pender County.

Since this was an inverse condemnation case, the North Carolina General Statutes say the court “shall determine and award or allow to such plaintiff, as a part of such judgment, such sum as will in the opinion of the judge reimburse such plaintiff for his reasonable cost, disbursements and expenses, including reasonable attorney, appraisal, and engineering fees, actually incurred because of such proceeding.”

Further, in an inverse condemnation case, “the judge shall…add interest at the legal rate as provided in G.S. 24-1 on said amount from the date of taking to the date of judgment”

NCGS 24-1 states: “The legal rate of interest shall be eight percent (8%) per annum for such time as interest may accrue, and no more.”

The date of taking is the date the Map Act was recorded in the Register of Deeds that listed the property owner.

Next step for Property Owners:

We have already filed inverse condemnation claims for over 100 property owners. We’re filing more each week. We have 6 years worth of evidence in the NCDOT cases, including 60,000 pages of their appraisals along the affected corridor properties.

Our standard attorney fees are 15% of the total recovery in a Northern Beltway case inverse condemnation. Considering that the NCDOT shall have to pay attorney fees in the case, the NCDOT will be paying your attorney fee, this will save you more. This fee is not paid unless we recover money for the property owner & is paid only at the time money is collected from the NCDOT.

There are bills in the N.C. Legislature attempting to repeal and/or amend the Map Act. Thus said, that could affect your inverse condemnation claim if it is not filed before certain deadlines to be determined in the legislation.

On March 24, 2015, the NCDOT has petitioned the NC Supreme Court to review the case. The N.C. Supreme Court does not have to grant their petition for appeal. The attorneys at Hendrick Bryant are preparing a response to the petition. We contend the N.C. Appellate Court made the correct ruling on the law.

The time is now to file your case. Call 336-723-7200. We’re the attorneys who won the battle for Map Act affected Property owners.